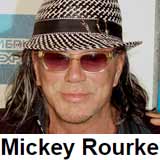 Review: 2014-11-28, the fight between Mickey Rourke and Elliot Seymour was just an exhibition, so we don’t rate it as the other professional bouts…anyway, it was the worst boxing exhibition we have ever seen, don’t watch it!! The 62-year-old Mickey Rourke (33 years older than Seymour), better known as a movie actor who received a Golden Globe for starring in “The Wrestler”, entered this fight with a professional boxing record of 6-0-2 (4 knockouts) but he hasn’t fought since September 9, 1994 when he drew against Sean Gibbons.
His opponent, Elliot Seymour, has an official record of 1-9-0 (1 knockout) and he usually fights as a light middleweight (154 lbs, 69.9 kg) but both boxers weighed 179,2 pounds at the weigh-in. Rourke vs Seymour undercard of Ruslan Provodnikov vs Jose Luis Castillot. Watch the video and rate this fight!