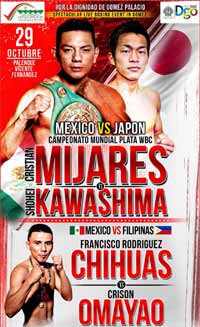 Review by AllTheBestFights.com: 2016-10-29, disappointing fight between Cristian Mijares and Shohei Kawashima: it gets two stars.

The former Wbc, Wba and Ibf champion Cristian Mijares entered this fight with a pro boxing record of 54-8-2 (26 knockouts) and he is ranked as the No.17 featherweight in the world while his opponent, the undefeated Shohei Kawashima, has a record of 14-0-2 (3 knockouts). Mijares suffered his last defeat when he faced Leo Santa Cruz in 2014 (=Santa Cruz vs Mijares), but then he has won five bouts winning over Andres Gutierrez in 2016 (=Gutierrez vs Mijares) while Kawashima has fought twice this year beating Jin Wook Lim and Yoshiyuki Takabayashi. ‘El Diamante’ Mijares vs Kawashima is valid for the WBC Silver featherweight title. Watch the video and rate this fight!