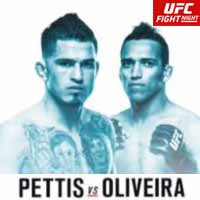 Review by AllTheBestFights.com: 2016-08-27, great performance by both fighters: Anthony Pettis vs Charles Oliveira gets three stars.

The black belt in tae-kwon-do and former Ufc Lw champion Anthony Pettis entered this fight with a pro record of 18-5-0 (83% finishing rate) and he is ranked as the No.6 lightweight in the world but he comes off three consecutive losses, against Rafael dos Anjos (=Pettis vs dos Anjos), current #1 Ufc Lw champion Eddie Alvarez (=Pettis vs Alvarez) and Edson Barboza (=Pettis vs Barboza). Pettis makes his Ufc featherweight debut in this bout.
His opponent, the black belt in Bjj Charles Oliveira, has an official mma record of 21-5-0 (90% finishing rate) and he entered as the No.6 featherweight (currently the #1 in this division is Conor McGregor). ‘Do Bronx’ fought three times last year beating Nik Lentz (=Lentz vs Oliveira 2) and Myles Jury (=Oliveira vs Jury) but between these two fights he was defeated by Max Holloway (=Holloway vs Oliveira). Pettis vs Oliveira is on the undercard of Demian Maia vs Carlos Condit – UFC on Fox 21. Watch the video and rate this fight!