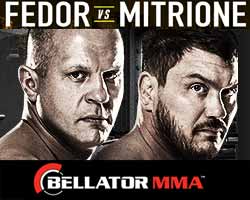 Review by AllTheBestFights.com: 2017-06-24, great start between Fedor Emelianenko and Matt Mitrione: it gets three stars.

The 40-year-old former Pride and world combat sambo champion Fedor Emelianenko (two years older than Mitrione) entered this fight with a pro mma record of 36-4-0 (75% finishing rate) and he is ranked as the No.29 heavyweight in the world. ‘The Last Emperor’ suffered three consecutive defeats between 2010 and 2011, against the former #1 Ufc Hw champion Fabricio Werdum, Antonio ‘Bigfoot’ Silva (=Silva vs Emelianenko), and Dan Henderson (=Henderson vs Emelianenko), but then Fedor has won five bouts beating Fabio Maldonado in 2016 (mma Fight of the Year candidate, Fedor vs Maldonado).
His opponent, the black belt in karate Matt Mitrione, has a record of 11-5-0 (91% ko/tko victory rate – he has never won via submission) and he entered as the No.21 in the same weight class. He lost twice between 2015 and 2016, against Ben Rothwell (=Rothwell vs Mitrione) and Travis Browne (= Browne vs Mitrione), but then he has won over Carl Seumanutafa (=Mitrione vs Seumanutafa) and Oli Thompson (=Mitrione vs Thompson). Fedor Emelianenko vs Mitrione is on the undercard of Chael Sonnen vs Wanderlei Silva – Bellator 180. Watch the video and rate this fight!

(Free embeddable video hosted on Youtube and not uploaded by AllTheBestFights)
https://www.youtube.com/watch?v=uz-KRNLJACw