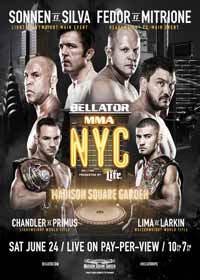 Review by AllTheBestFights.com: 2017-06-24, good exchanges between Michael Chandler and Brent Primus: it gets three stars.

The Bellator Lw champion Michael Chandler entered this fight with a professional record of 16-3-0 (81% finishing rate) and he is ranked as the No.6 lightweight in the world (currently the #1 in this division is Conor McGregor) while his opponent, the undefeated black belt in Brazilian jiu-jitsu Brent Primus, has a perfect mma record of 7-0-0 (71% finishing rate). Chandler fought twice last year beating Patricky Freire (=Chandler vs Freire 2) and Benson Henderson (=Chandler vs Henderson) while Primus fought once defeating Gleristone Santos. Brent Primus vs Michael Chandler is valid for the Bellator lightweight title (Chandler’s second defense); undercard of Chael Sonnen vs Wanderlei Silva – Bellator 180. Watch the video and rate this fight!