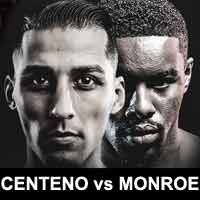 Review by AllTheBestFights.com: 2019-06-01, fight not so exciting between Hugo Centeno Jr and Willie Monroe Jr: it gets two stars.

Hugo Centeno Jr entered this fight with a pro record of 27-2-0 (14 knockouts) and he is ranked as the No.13 middleweight in the world. He lost to Jermall Charlo last year (Jermall Charlo vs Hugo Centeno Jr) but he came back to win against Oscar Cortes in 2019.
His opponent, Willie Monroe Jr, has an official boxing record of 23-3-0 (6 knockouts) and he entered as the No.12 super middleweight. He lost to Billy Joe Saunders in 2017 (Billy Joe Saunders vs Willie Monroe Jr) but then he has beat Carlos Galvan and Javier Francisco Maciel (Willie Monroe Jr vs Javier Francisco Maciel). Centeno vs Monroe is on the undercard of Devon Alexander vs Ivan Redkach. Watch the video and rate this fight!