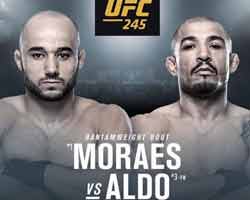 Review by AllTheBestFights.com: 2019-12-14, close fight but not so exciting: Marlon Moraes vs Jose Aldo gets two stars.

The black belt in Bjj and former Wsof Bw champ Marlon Moraes entered this fight with a record of 22-6-1 (73% finishing rate) and he is ranked as the No.3 bantamweight in the world but he comes off the loss against current #1 Bw Henry Cejudo (Henry Cejudo vs Marlon Moraes); before this fight, between 2018 and 2019, he had beat Jimmie Rivera (Jimmie Rivera vs Marlon Moraes) and he took revenge on Raphael Assuncao in their second bout (Raphael Assuncao vs Marlon Moraes 2).
His opponent, the black belt in Brazilian jiu-jitsu and former Ufc Fw champion Jose Aldo, has an official mma record of 28-5-0 (64% finishing rate) and he entered as the No.3 featherweight but he also lost his last bout, against Alexander Volkanovski (Jose Aldo vs Alexander Volkanovski); before this fight, ‘Scarface’ Aldo had beat Jeremy Stephens in 2018 (Jose Aldo vs Jeremy Stephens) and Renato Moicano in 2019 (Jose Aldo vs Renato Moicano Carneiro). Moraes vs Aldo is on the undercard of Kamaru Usman vs Colby Covington – UFC 245. Watch the video and rate this fight!