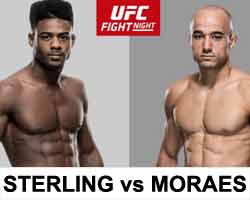 Review by AllTheBestFights.com: 2017-12-09, spectacular finish between Marlon Moraes and Aljamain Sterling: it is close to get four stars (UFC Performance of the Night).

Aljamain Sterling entered this fight with a professional record of 14-2-0 (57% finishing rate) and he is ranked as the No.9 bantamweight in the world (currently the #1 in this division is TJ Dillashaw). He lost two consecutive fights between 2016 and 2017, against Bryan Caraway and Raphael Assuncao (=Sterling vs Assuncao) but then he has defeated Augusto Mendes and Renan Barao (=Sterling vs Barao).
His opponent, the former Wsof Bw champion Marlon Moraes, has a mma record of 19-5-1 (68% finishing rate) and he entered as the No.8 in the same weight class. He has fought twice in 2017 losing to Raphael Assuncao (=Moraes vs Assuncao) and beating John Dodson (=Dodson vs Moraes). Moraes vs Sterling is on the undercard of Cub Swanson vs Brian Ortega – UFC Fight Night 123. Watch the video and rate this fight!

(Free embeddable video hosted on Youtube and not uploaded by AllTheBestFights)
https://www.youtube.com/watch?v=exjkLUFwUVg