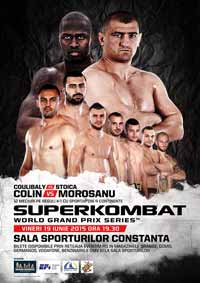 Review by AllTheBestFights.com: 2015-06-19, pretty good fight between Andrei Stoica and Abdarhmane Coulibaly: it gets three stars.

Andrei Stoica entered this fight with a pro kickboxing record of 37-6-0 (24 knockouts) and he is ranked as the No.8 super cruiserweight in the world. He suffered his last defeat in 2014 when he faced Danyo Ilunga (=Ilunga vs Stoica), after this bout he has won five fights beating Thomas Alizier in his last one (=Stoica vs Alizier).
His opponent, Abdarhmane Coulibaly, has an official record of 55-16-1 (25 knockouts – or 48-15-0 with 21 knockouts on wikipedia) but he comes off four consecutive losses. Stoica vs Coulibaly is on the undercard of Catalin Morosanu vs Colin George – SuperKombat World Grand Prix III 2015. Watch the video and rate this fight!