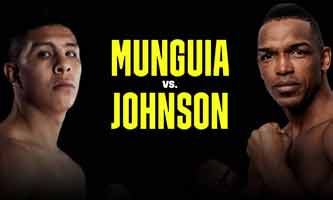 Review by AllTheBestFights.com: 2020-10-30, pretty good fight between Jaime Munguia and Tureano Johnson: it gets three stars.
The undefeated former Wbo light-Mw champion Jaime Munguia entered this fight with a perfect boxing record of 35-0-0 (28 KOs=80%) and he is ranked as the No.6 middleweight in the world (currently the #1 in this division is Saul ‘Canelo’ Alvarez). In his last three fights he has beat Dennis Hogan (Jaime Munguia vs Dennis Hogan), Patrick Allotey (Jaime Munguia vs Patrick Allotey) and Gary O’Sullivan (Jaime Munguia vs Gary O’Sullivan).
His opponent, the former Olympian Tureano Johnson, has an official record of 21-2-1 (15 knockouts) and he entered as the No.23 in the same weight class. He lost to Sergiy Derevyanchenko in 2017 (Sergiy Derevyanchenko vs Tureano Johnson) but then he has tied with Fernando Castaneda and has beat Jason Quigley. Johnson vs Munguia is valid for the WBO Intercontinental middleweight title. Watch the video and rate this fight!