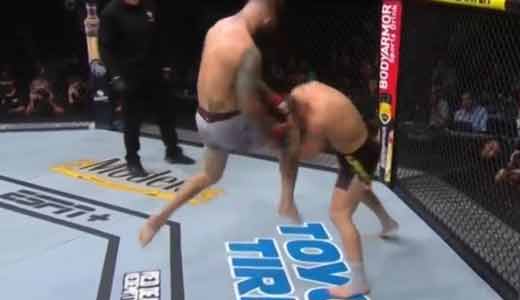 Review by AllTheBestFights.com: 2019-03-02, tremendous exchanges with a spectacular finish: Cody Garbrandt vs Pedro Munhoz is one of the best mma fights of the year 2019 and it gets four stars (UFC Fight of the Night).

The former Ufc Bw champ Cody Garbrandt entered this fight with a pro record of 11-2-0 (82% ko/tko victory rate – he has never won via submission) and he is ranked as the No.4 bantamweight in the world but he comes off two consecutive losses, both against current #1 Ufc Bw champion TJ Dillashaw (Cody Garbrandt vs TJ Dillashaw I and TJ Dillashaw vs Cody Garbrandt II); before this bout, in 2017, he had beat Dominick Cruz (Cruz vs Garbrandt).
His opponent, the black belt in Brazilian jiu-jitsu Pedro Munhoz, has an official mma record of 17-3-0 (71% finishing rate) and he entered as the No.9 in the same weight class. He fought three times last year losing to John Dodson (via split decision, John Dodson vs Pedro Munhoz) but then he defeated Brett Johns (Pedro Munhoz vs Brett Johns) and Bryan Caraway (Pedro Munhoz vs Bryan Caraway). Garbrandt vs Munhoz is on the undercard of Jon Jones vs Anthony Smith – UFC 235. Watch the video and rate this fight!