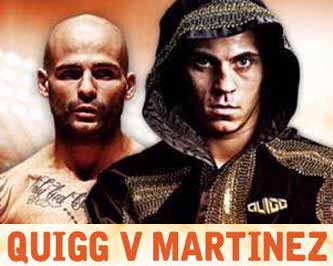 Review by AllTheBestFights.com: 2015-07-18, pretty good fight between Scott Quigg and Kiko Martinez: it gets three stars.

The undefeated Scott Quigg entered this fight with a professional boxing record of 30-0-2 (22 knockouts) and he is ranked as the No.5 super bantamweight in the world (currently the #1 in this division is Carl Frampton). He fought three times last year winning over Tshifhiwa Munyai (=Quigg vs Munyai), Stephane Jamoye (=Quigg vs Jamoye) and Hidenori Otake (=Quigg vs Otake).
His opponent, Kiko Martinez, has an official record of 32-5-0 (24 KOs=75%) and he entered as the No.3 bantamweight. He suffered his last defeat in 2014 when he faced Carl Frampton losing his Ibf super-Bw title (=Martinez vs Frampton 2), after this bout he came back to win beating George Gachechiladze. Quigg vs Martinez is valid for the WBA World super bantamweight title (held by Quigg). Watch the video and rate this fight!