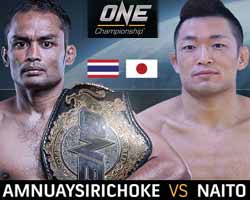 Both undefeated, the former two division Lumpinee muay thai champion Dejdamrong Sor Amnuaysirichoke entered this fight with a perfect mma record of 6-0-0 (67% finishing rate) and he is ranked as the No.8 strawweight in the world while his opponent, the Shooto champion Yoshitaka ‘Nobita’ Naito, has an official record of 10-0-0 (50% finishing rate) and he entered as the No.2 in the same weight class. Both fighters fought twice last year: Dejdamrong won the One Fc belt against Roy Doliguez (=Doliguez vs Dejdamrong) and then he beat Yago Bryan Farias de Morais (=Dejdamrong vs Yago Bryan) while Naito defeated Ryuto Sawada and Junji Ito. Amnuaysirichoke vs Naito, main event of One Fc 43, is valid for the One strawweight title (Dejdamrong’s first defense). Watch the video and rate this fight!

Event: One Championship 43: Kingdom of Champions