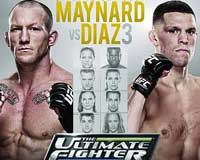 Review: 2013-11-30, nice and tough fight between Gray Maynard and Nate Diaz: it gets three stars. Gray Maynard (11-2-1, 18% ko/tko victory rate) entered as the No.13 lightweight in the world while Nate Diaz (16-9-0, 88% finishing rate) entered as the No.14. In their first professional fight Maynard defeated Diaz by split decision (January 11, 2010) but they had already faced each other previously in the semifinal of “The Ultimate Fighter 5” and Diaz won by submission (but it is not recorded as a professional fight); this second fight is the main event of The Ultimate Fighter 18 Finale. Watch the video!