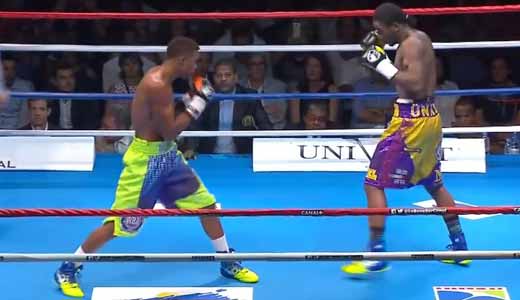 Review by AllTheBestFights.com: 2016-12-17, Hassan N’Dam vs Alfonso Blanco gets four stars thanks to a spectacular finish: this is one of the best boxing fights of 2016!

The former Wbo Mw champion Hassan N’Dam N’Jikam entered this fight with a professional record of 34-2-0 (20 knockouts) and he is ranked as the No.13 middleweight in the world. He lost to David Lemieux last year (=Lemieux vs N’Dam) but then he has won over Patrick Mendy (=N’Dam vs Mendy), Robert Swierzbinski (=N’Dam vs Swierzbinski) and Tomasz Gargula.
His opponent, the undefeated Alfonso Blanco, has a perfect record of 12-0-0 (5 knockouts) but he is not ranked as he hasn’t fought since October 10, 2015 when he defeated Siarhei Khamitski. N’Dam vs Blanco is valid for the interim WBA World middleweight title. Watch the video and rate this fight!