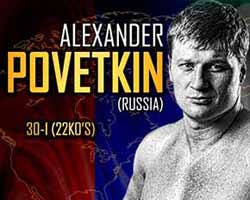 Review by AllTheBestFights.com: 2016-12-17, spectacular finish between Alexander Povetkin and Johann Duhaupas: it is very close to get four stars!

The 2004 Olympic super-heavyweight gold medalist and former Wba Hw champion Alexander Povetkin entered this fight with a professional boxing record of 30-1-0 (22 knockouts) but he is not ranked as he hasn’t fought since November 4, 2015 when he defeated Mariusz Wach (=Povetkin vs Wach). Povetkin’s only loss occurred when he faced Wladimir Klitschko in 2013 (=Klitschko vs Povetkin).
His opponent, Johann Duhaupas, has an official record of 34-3-0 (21 knockouts) and he entered as the No.9 heavyweight in the world (currently the #1 in this division is Luis Ortiz). He lost to Deontay Wilder last year (=Wilder vs Duhaupas) but he came back to win in 2016 beating Marcelo Luiz Nascimento and Robert Helenius (=Helenius vs Duhaupas). On the original fight card Povetkin was expected to face Bermane Stiverne for the interim Wbc heavyweight title but Stiverne refused to fight the Russian after failed drug test (it’s the second time Povetkin was caught after the fight scheduled in May Wilder vs Povetkin). Watch the video and rate this fight!