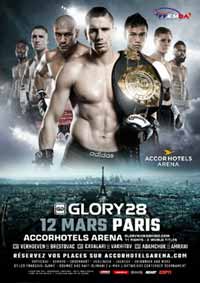 Review by AllTheBestFights.com: 2016-03-12, fight not particularly good between Sergey Adamchuk and Mosab Amrani: it gets two stars.

The Glory Fw champion Sergey Adamchuk entered this fight with a record of 31-5-0 (14 knockouts) and he is ranked as the No.4 welterweight in the world while his opponent, the former WMC Fw champion Mosab Amrani, has an official record of 55-10-4 (18 knockouts) and he entered as the No.6 in the same weight class. In their last bout Adamchuk defeated Gabriel Varga (=Varga vs Adamchuk) while Amrani (who had lost to Varga at the beginning of 2015 Varga vs Amrani) won the Glory Fw contender tournament beating Maykol Yurk. Adamchuk vs Amrani is valid for the Glory featherweight title (Adamchuk’s first defense); undercard of Rico Verhoeven vs Mladen Brestovac – Glory 28. Watch the video and rate this fight!