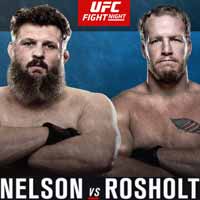 Review by AllTheBestFights.com: 2016-02-06, boring fight between Roy Nelson and Jared Rosholt: it gets one star!

The black belt in Brazilian jiu-jitsu and Tuf 10 Hw winner Roy Nelson entered this fight with a pro mma record of 20-12-0 (90% finishing rate) and he is ranked as the No.25 heavyweight in the world but he won just one out of his last six bouts, against Antonio Rodrigo Nogueira in 2014 (=Nogueira vs Nelson). ‘Big Country’ fought twice last year losing to Alistair Overeem (=Overeem vs Nelson) and Josh Barnett (=Barnett vs Nelson).
His opponent, Jared Rosholt, has a record of 14-2-0 (50% finishing rate) and he entered as the No.16 in the same weight class. He suffered his last loss in 2014 when he faced Alexey Oleinik (=Rosholt vs Oleinik), after this bout he has won three fights beating Stefan Struve in his last one (=Struve vs Rosholt). Nelson vs Rosholt is on the undercard of Johny Hendricks vs Stephen Thompson – UFC Fight Night 82. Watch the video and rate this fight!