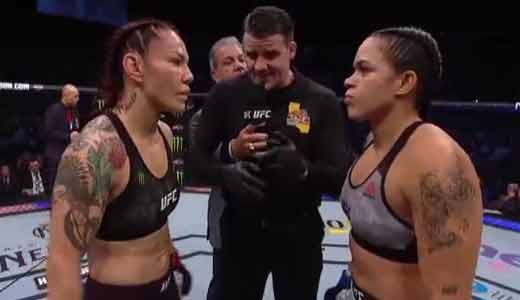 Review by AllTheBestFights.com: 2018-12-29, tough fight with some heavy exchanges from the first bell: Cris Cyborg Justino vs Amanda Nunes is one of the best mma fights of 2018 and it gets four stars (UFC Performance of the Night).

The current Ufc women’s Fw, former Strikeforce and Invicta Fc champion Cristiane Cyborg Justino entered this fight with a pro mma record of 20-1-0 (85% ko/tko victory rate – she has never won via submission) and she is ranked as the No.1 women’s featherweight in the world. She suffered her only loss at her professional mma debut, against Erica Paes in 2005, since then she has won 20 consecutive bouts beating Tonya Evinger (Cyborg vs Evinger), Holly Holm (Cris Cyborg Justino vs Holly Holm) and Yana Kunitskaya in her last three (Cris Cyborg Justino vs Yana Kunitskaya).
Her opponent, the black belt in Brazilian jiu-jitsu and current Ufc women’s Bw champ Amanda Nunes, has a record of 16-4-0 (87% finishing rate) and she entered as the No.1 women’s bantamweight. She suffered her last loss when she faced Cat Zingano in 2014 (Zingano vs Nunes), since then she has won seven bouts beating Ronda Rousey (Nunes vs Rousey), Valentina Shevchenko (Amanda Nunes vs Valentina Shevchenko 2) and Raquel Pennington in her last three (Amanda Nunes vs Raquel Pennington). Cyborg vs Nunes is valid for the Ufc women’s featherweight title (Cyborg’s third defense); undercard of Jon Jones vs Alexander Gustafsson 2 – UFC 232. Watch the video and rate this fight!