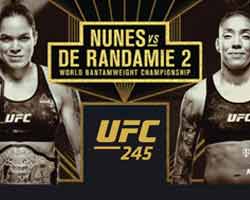 The black belt in Brazilian jiu-jitsu, current Ufc women’s Fw and Bw champion Amanda Nunes entered this fight with a pro record of 18-4-0 (89% finishing rate) and she is ranked as the No.1 women’s bantamweight in the world. She suffered her last loss when she faced Cat Zingano in 2014 (Zingano vs Nunes), since then she has won nine consecutive bouts beating Cris Cyborg (Cris Cyborg Justino vs Amanda Nunes) and Holly Holm in her last two (Amanda Nunes vs Holly Holm).
Her opponent, the former Ufc women’s Fw champ Germaine de Randamie, has an official record of 9-3-0 (44% ko/tko victory rate – she has never won via submission) and she entered as the No.2 in the same weight class. She suffered her last loss when she faced Amanda Nunes in their first bout in 2013, since then she has fought just five times beating Holly Holm (Holly Holm vs Germaine de Randamie), Raquel Pennington and Aspen Ladd in her last three (Germaine de Randamie vs Aspen Ladd). Nunes vs de Randamie 2 is valid for the Ufc women’s bantamweight title (Nunes’ fifth defense); undercard of Kamaru Usman vs Colby Covington – UFC 245. Watch the video and rate this fight!