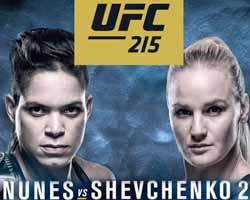 Review by AllTheBestFights.com: 2017-09-09, boring and disappointing fight: Amanda Nunes vs Valentina Shevchenko 2 gets one star!

The black belt in Brazilian jiu-jitsu and current Ufc women’s Bw champion Amanda Nunes entered this fight with a pro mma record of 14-4-0 (93% finishing rate) and she is ranked as the No.1 women’s bantamweight in the world. She suffered her last loss when she faced Cat Zingano in 2014 (=Zingano vs Nunes), since then she has won five bouts beating Valentina Shevchenko in their first fight at the beginning of 2016 (=Nunes vs Shevchenko) and then she has defeated Miesha Tate (=Tate vs Nunes) and Ronda Rousey (=Nunes vs Rousey).
Her opponent, the black belt in tae-kwon-do, judo and former Wako, Wmf and Kunlun fight kickboxing champion Valentina Shevchenko, has a record of 14-2-0 (71% finishing rate) and she entered as the No.2 in the same weight class. After losing to Amanda Nunes last year she has beat Holly Holm (=Holm vs Shevchenko) and Julianna Pena (=Shevchenko vs Pena). Amanda Nunes vs Valentina Shevchenko 2 is valid for the Ufc women’s bantamweight title (Nunes’ second defense) and it is the main event of the Ufc 215; on the original fight card the main event was Demetrious Johnson vs Ray Borg but the bout was canceled since Borg was forced to withdraw from the fight due to illness. Watch the video and rate this fight!

(Free embeddable video hosted on Youtube and not uploaded by AllTheBestFights)
https://www.youtube.com/watch?v=bhU6CWOywyU