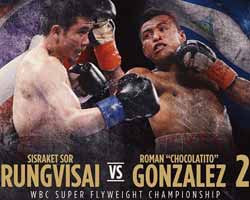 Review by AllTheBestFights.com: 2017-09-09, tough fight with a nice finish: Wisaksil Wangek vs Roman Gonzalez 2 is close to get four stars!

The Wbc super-Flw champion Srisaket Sor Rungvisai (also known as Wisaksil Wangek) entered this fight with a record of 43-4-1 (39 KOs=91%) and he is ranked as the No.1 super flyweight in the world. He suffered his last loss when he faced Carlos Cuadras in 2014 (=Rungvisai vs Cuadras), since then he has won 15 consecutive bouts defeating Roman Gonzalez in his last one but it was a controversial decision (4-stars fight, Gonzalez vs Rungvisai I).
His opponent, the former world champion in four different weight classes Roman Gonzalez, has a boxing record of 46-1-0 (38 KOs=83%) and he entered as the No.2 in the same weight class. Before losing to Wisaksil Wangek, ‘Chocolatito’ had won twice in 2016 beating McWilliams Arroyo (=Gonzalez vs Arroyo) and Carlos Cuadras (4-stars fight, Cuadras vs Gonzalez). Roman Gonzalez vs Srisaket Sor Rungvisai 2 is valid for the WBC World super flyweight title (Rungvisai’s first defense). Watch the video and rate this fight!

Their previous fight: Roman Gonzalez vs Srisaket Sor Rungvisai I

(Free embeddable video hosted on Youtube and not uploaded by AllTheBestFights)
https://www.youtube.com/watch?v=37plKSP76_k