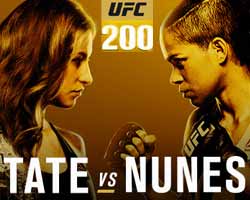 Review by AllTheBestFights.com: 2016-07-09, good fight between Miesha Tate and Amanda Nunes: it gets three stars (UFC Performance of the Night).

The former Strikeforce and current Ufc Bw champion Miesha Tate entered this fight with a pro mma record of 18-5-0 (56% finishing rate) and she is ranked as the No.1 women’s bantamweight in the world. She lost two consecutive fights in 2013, against Cat Zingano (4-stars-fight, Tate vs Zingano) and Ronda Rousey (=Rousey vs Tate 2), but since then she has won five consecutive bouts beating Holly Holm in 2016 (=Holm vs Tate).
Her opponent, the black belt in Brazilian jiu-jitsu Amanda Nunes, has a record of 12-4-0 (92% finishing rate) and she entered as the No.6 in the same weight class. She also lost to Zingano, in 2014 (=Zingano vs Nunes), but then she has won three fights defeating Valentina Shevchenko in 2016 (=Nunes vs Shevchenko). Tate vs Nunes, main event of the Ufc 200, is valid for the Ufc women’s bantamweight title (Tate’s first defense); on the original fight card the main event was Jon Jones vs Daniel Cormier 2 but on June 6, 2016, ‘Bones’ was pulled from the card after potentially failing a drug test. Watch the video and rate this fight!