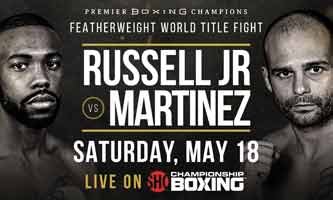 Review by AllTheBestFights.com: 2019-05-18, one sided fight between Gary Russell Jr and Kiko Martinez: it gets two stars.

The former Olympian and Wbc Fw champion Gary Russell Jr entered this fight with a record of 29-1-0 (17 knockouts) and he is ranked as the No.4 featherweight in the world (currently the #1 in this division is Leo Santa Cruz). He suffered his only loss when he faced Vasyl Lomachenko in 2014 (via majority decision, Lomachenko vs Russell), after this fight he has won five consecutive bouts beating Oscar Escandon (Gary Russell Jr vs Oscar Escandon) and Joseph Diaz in his last two (Gary Russell Jr vs Joseph Diaz).
His opponent, the former IBF super-Bw champ Kiko Martinez, has a boxing record of 39-8-2 (28 knockouts) and he entered as the No.26 in the same weight class. He lost to Josh Warrington in 2017 (Josh Warrington vs Kiko Martinez) but since then he has collected three victories and one technical draw beating Marc Vidal in his last one. Russell vs Martinez is valid for the WBC World featherweight title; undercard of Deontay Wilder vs Dominic Breazeale. Watch the video and rate this fight!