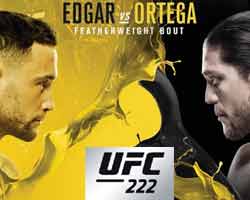 Review by AllTheBestFights.com: 2018-03-03, pretty good finish between Frankie Edgar and Brian Ortega: it gets three stars (UFC Performance of the Night).

The black belt in Brazilian jiu-jitsu and former Ufc Lw champion Frankie Edgar entered this fight with a pro mma record of 22-5-1 (50% finishing rate) and he is ranked as the No.3 featherweight in the world (currently the #1 in this division is Max Holloway). He lost to Jose Aldo in 2016 (Edgar vs Aldo 2) but then he has beat Jeremy Stephens (Edgar vs Stephens) and Yair Rodriguez (Frankie Edgar vs Yair Rodriguez).
His opponent, the undefeated black belt in Bjj Brian Ortega, has a perfect record of 13-0-0 (69% finishing rate) and he entered as the No.5 in the same weight class. He fought twice last year winning over Renato Moicano Carneiro (Carneiro vs Ortega) and Cub Swanson (Cub Swanson vs Brian Ortega). Edgar vs Ortega is on the undercard of Cris Cyborg Justino vs Yana Kunitskaya – UFC 222. Watch the video and rate this fight!