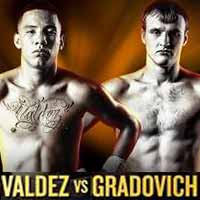 Review by AllTheBestFights.com: 2016-04-09, nice and tough exchanges between Oscar Valdez and Evgeny Gradovich: it gets three stars.

The undefeated Oscar Valdez entered this fight with a perfect record of 18-0-0 (16 KOs=89%) and he is ranked as the No.7 featherweight in the world (currently the #1 in this division is Leo Santa Cruz). He fought four times last year beating Jose Ramirez, Ruben Tamayo (=Valdez vs Tamayo), Chris Avalos (=Avalos vs Valdez ) and Ernie Sanchez (=Valdez vs Sanchez).
His opponent, the former Ibf Fw champion Evgeny Gradovich, has an official boxing record of 21-1-1 (9 knockouts) and he entered as the No.16 in the same weight class. He suffered his only loss when he faced Lee Selby last year (=Gradovich vs Selby), after this bout he has won over Aldimar Silva Santos (=Gradovich vs Silva Santos) and Jesus Galicia (4-stars-fight Gradovich vs Galicia). Valdez vs Gradovich is valid for the vacant WBO NABO featherweight title; undercard of Manny Pacquiao vs Timothy Bradley 3. Watch the video and rate this fight!