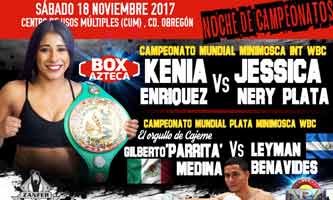 Review by AllTheBestFights.com: 2017-11-18, nice exchanges between Gilberto Parra Medina and Leyman Benavides: it gets three stars.

Gilberto Parra Medina entered this fight with a record of 25-3-0 (20 KOs=80%) and he is ranked as the No.20 light flyweight in the world. ‘Parrita’ lost to Donnie Nietes in 2015 (=Nietes vs Parra) but then he has won six consecutive fights beating Jose Rivas in his last one.
His opponent, Leyman Benavides, has a boxing record of 13-5-1 (2 knockouts) and he entered as the No.47 in the same weight class. He was defeated by Cristian Flores in 2015 but then he has beat twice Francisco Vargas and once Eliezer Gazo. Medina vs Benavides is valid for the vacant WBC Silver light flyweight title; undercard of Kenia Enriquez vs Jessica Nery Plata. Watch the video and rate this fight!