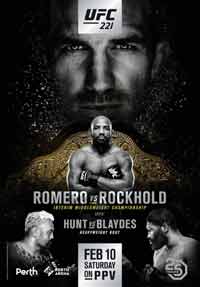 Review by AllTheBestFights.com: 2018-02-11, nice finish between Tyson Pedro and Saparbek Safarov: it gets three stars.

Tyson Pedro entered this fight with a pro record of 6-1-0 (100% finishing rate) and he is ranked as the No.33 light heavyweight in the world. He fought twice in 2017 beating Paul Craig and losing to Ilir Latifi (Ilir Latifi vs Tyson Pedro).
His opponent, Saparbek Safarov, has an official mma record of 8-1-0 (100% finishing rate) and he also comes off his first defeat, suffered against Gian Villante in 2016; before this bout he had beat Rodney Wallace. Pedro vs Safarov is on the undercard of Yoel Romero vs Luke Rockhold – UFC 221. Watch the video and rate this fight!

(Free embeddable video hosted on Youtube and not uploaded by AllTheBestFights)
https://www.youtube.com/watch?v=Sd-uYApNmc8