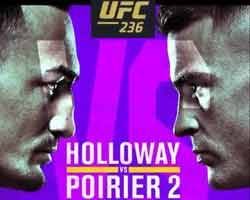 Review by AllTheBestFights.com: 2019-04-13, great performance by both fighters: Max Holloway vs Dustin Poirier 2 is close to get four stars (UFC Fight of the Night).

The Ufc Fw champion Max Holloway entered this fight with a professional mma record of 20-3-0 (60% finishing rate) and he is ranked as the No.1 featherweight in the world. He suffered two consecutive defeats in 2013, against Dennis Bermudez and Conor McGregor (McGregor vs Holloway), but then he has won 13 consecutive bouts beating twice Jose Aldo in 2017 (Aldo vs Holloway I and Max Holloway vs Jose Aldo II) and Brian Ortega in 2018 (Max Holloway vs Brian Ortega).
His opponent, the black belt in Brazilian jiu-jitsu Dustin Poirier, has an official record of 24-5-0 (79% finishing rate) and he entered as the No.3 lightweight (currently the #1 in this division is Khabib Nurmagomedov). He was defeated by Michael Johnson in 2016 (Poirier vs Johnson) but then he has collected four victories and one no-contest; last year he beat Justin Gaethje (Dustin Poirier vs Justin Gaethje) and Eddie Alvarez (Eddie Alvarez vs Dustin Poirier 2). In their first fight Holloway was defeated by Poirier via submission (February 4, 2012 –
Dustin Poirier vs Max Holloway I); this second fight , main event of Ufc 236, is valid for the interim UFC lightweight title. Watch the video and rate this fight!