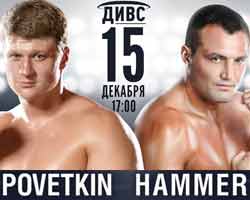 Review by AllTheBestFights.com: 2017-12-15, disappointing fight between Alexander Povetkin and Christian Hammer: it gets two stars.

The 2004 Olympic super-heavyweight gold medalist and former Wba Hw champion Alexander Povetkin entered this fight with a professional record of 32-1-0 (23 knockouts) and he is ranked as the No.2 heavyweight in the world (currently the #1 in this division is Anthony Joshua). He suffered his only loss when he faced Wladimir Klitschko in 2013 (=Klitschko vs Povetkin), since then he has won six bouts beating Johann Duhaupas (=Povetkin vs Duhaupas) and Andriy Rudenko in his last two (=Povetkin vs Rudenko).
His opponent, Christian Hammer, has a boxing record of 22-4-0 (12 knockouts) and he entered as the No.10 in the same weight class. He suffered his last loss when he faced former #1 Tyson Fury in 2015 (=Fury vs Hammer), after this fight he has won five bouts beating David Price (=Hammer vs Price) and Zine Eddine Benmakhlouf in 2017. Povetkin vs Hammer is valid for the WBO International heavyweight title. Watch the video and rate this fight!