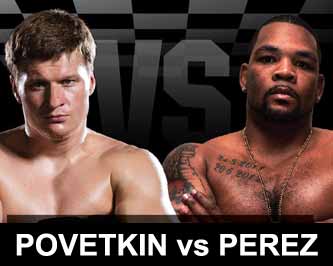 Review by AllTheBestFights.com: 2015-05-22, great start between Alexander Povetkin and Mike Perez: it gets three stars.

The 2004 Olympic super heavyweight gold medalist and former Wba world champion Alexander Povetkin entered this fight with a professional boxing record of 28-1-0 (20 knockouts) and he is ranked as the No.2 heavyweight in the world. He suffered his only defeat in 2013 when he faced #1 Wladimir Klitschko (=Klitschko vs Povetkin), since then he has fought twice beating Manuel Charr (=Povetkin vs Charr) and Carlos Takam (=Povetkin vs Takam).
His opponent, the Cuban Mike Perez, has an official record of 21-1-1 (13 knockouts) and he entered as the No.11 in the same weight class. He fought twice last year drawing with Carlos Takam (=Perez vs Takam) and losing to Bryant Jennings (=Jennings vs Perez); ‘The Rebel’ Perez came back to win in 2015 defeating Darnell Wilson (=Perez vs Wilson). Povetkin vs Perez is valid for the WBC Silver heavyweight title. Watch the video and rate this fight!