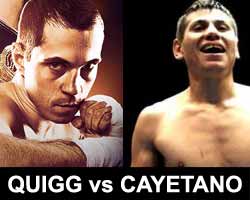 Review by AllTheBestFights.com: 2016-12-10, pretty good fight between Scott Quigg and Jose Cayetano: it gets three stars.

The former Wba super-Bw champion Scott Quigg entered this fight with a record of 31-1-2 (23 knockouts) and he is ranked as the No.1 super bantamweight in the world but he comes off the loss against current #1 Fw Carl Frampton (=Frampton vs Quigg).
His opponent, Jose Cayetano, has an official record of 20-4-0 (9 knockouts) and he entered as the No.13 in the same weight class. He lost two consecutive bouts in 2015, against Enrique Bernache and Leo Santa Cruz (=Santa Cruz vs Cayetano), but then he has won three fights beating Alexis Santiago in his last one. Quigg vs Cayetano is valid for the vacant WBA International featherweight title; undercard of Anthony Joshua vs Eric Molina. Watch the video and rate this fight!