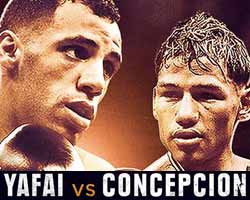 Review by AllTheBestFights.com: 2016-12-10, too much holding and too many interruptions between Kal Yafai and Luis Concepcion: it gets two stars.

The former Wba Flw and current Wba super-Flw champion Luis Concepcion entered this fight with a professional record of 35-4-0 (24 knockouts) and he is ranked as the No.5 super flyweight in the world (currently the #1 in this division is Roman Gonzalez). He lost to Carlos Cuadras last year (=Cuadras vs Concepcion) but then he has won three fights beating Hernan Marquez (=Concepcion vs Marquez 3) and Kohei Kono in his last two (=Concepcion vs Kono).
His opponent, the undefeated Khalid Yafai, has a perfect boxing record of 20-0-0 (14 knockouts) and he entered as the No.10 in the same weight class. He has fought three times in 2016 winning over Dixon Flores (=Yafai vs Flores), Jozsef Ajtai and Johnson Tellez. ‘El Nica’ Concepcion vs Yafai is valid for the WBA World super flyweight title; undercard of Anthony Joshua vs Eric Molina. Watch the video and rate this fight!