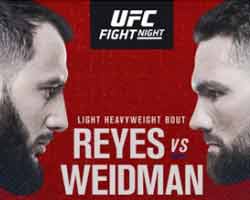 Review by AllTheBestFights.com: 2019-10-18, pretty good fight between Dominick Reyes and Chris Weidman: it gets three stars.

The undefeated Dominick Reyes entered this fight with a perfect record of 11-0-0 (73% finishing rate) and he is ranked as the No.9 light heavyweight in the world (currently the #1 in this division is Jon Jones). In his last three bouts he has won over Jared Cannonier (Dominick Reyes vs Jared Cannonier), Ovince St Preux (Ovince St Preux vs Dominick Reyes) and Volkan Oezdemir (Dominick Reyes vs Volkan Oezdemir).
His opponent, the black belt in Brazilian jiu-jitsu and former Ufc Mw champion Chris Weidman, has a mma record of 14-4-0 (71% finishing rate) and he entered as the No.11 middleweight but he won just one out of his last five bouts, against Kelvin Gastelum in 2017 (Chris Weidman vs Kelvin Gastelum); after this fight he was defeated by Ronaldo Jacare Souza in 2018 (Chris Weidman vs Ronaldo Jacare Souza). Reyes vs Weidman is the main event of UFC on ESPN 6. Watch the video and rate this fight!