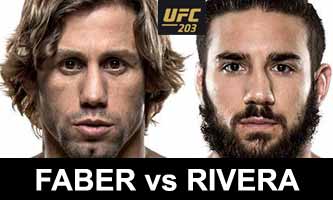 Review by AllTheBestFights.com: 2016-09-10, some good single shots between Urijah Faber and Jimmie Rivera but it is not enough to get three stars: it gets two.

Urijah Faber entered this fight with a professional record of 33-9-0 (79% finishing rate) and he is ranked as the No.3 bantamweight in the world but he lost two out of his last three bouts, against Frankie Edgar in 2015 (=Edgar vs Faber) and with #1 Ufc Bw champion Dominick Cruz in 2016 (=Cruz vs Faber 3). Between these two bouts he beat Frankie Saenz (=Faber vs Saenz).
His opponent, Jimmie Rivera, has a mma record of 19-1-0 (32% finishing rate) and he entered as the No.11 in the same weight class. He suffered his only loss at his second professional mma fight, against Jason McLean in 2008 (via split decision), since then he has collected 18 consecutive victories beating Iuri Alcantara in his last one (=Alcantara vs Rivera). Faber vs Rivera is on the undercard of Stipe Miocic vs Alistair Overeem – UFC 203. Watch the video and rate this fight!