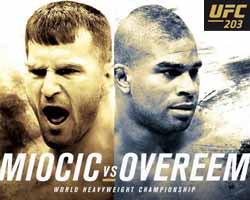 Review by AllTheBestFights.com: 2016-09-10, great fight between Stipe Miocic and Alistair Overeem: it gets three stars (UFC Fight of the Night).

The Ufc Hw champion Stipe Miocic entered this fight with a professional mma record of 15-2-0 (80% finishing rate) and he is ranked as the No.1 heavyweight in the world. He suffered his last loss when he faced Junior dos Santos in 2014 (=dos Santos vs Miocic), after this fight he has won over Mark Hunt (=Hunt vs Miocic), Andrei Arlovski (=Arlovski vs Miocic) and Fabricio Werdum (=Werdum vs Miocic).
His opponent, the former K-1, Strikeforce and Dream world champion Alistair Overeem, has an official record of 41-14-0 (90% finishing rate) and he entered as the No.4 in the same weight class. He also lost once in 2014, against Ben Rothwell (=Overeem vs Rothwell), but then ‘The Reem’ has won four bouts beating Junior dos Santos (=dos Santos vs Overeem) and Andrei Arlovski in his last two (=Overeem vs Arlovski). Miocic vs Overeem, main event of the Ufc 203, is valid for the Ufc heavyweight title (Miocic’s first defnese). Watch the video and rate this fight!