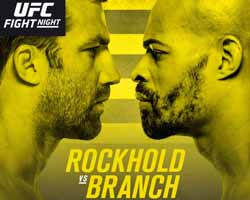 Review by AllTheBestFights.com: 2017-09-16, pretty good fight between Luke Rockhold and David Branch: it gets three stars.

The black belt in Brazilian jiu-jitsu, former Strikeforce and Ufc Mw champion Luke Rockhold entered this fight with a professional mma record of 15-3-0 (87% finishing rate) but he is not ranked as he hasn’t fought since June 4, 2016 when he was defeated by current #1 Michael Bisping in their rematch (=Rockhold vs Bisping 2). In their first bout Rockhold had defeated Bisping in two rounds (November 8, 2014 Rockhold vs Bisping), after this fight he had also won over Lyoto Machida (=Machida vs Rockhold) and Chris Weidman in 2015 (Weidman vs Rockhold).
His opponent, the black belt in Bjj, former Wsof light-Hw and Mw champion David Branch, has an official record of 21-3-0 (57% finishing rate) and he entered as the No.8 middleweight in the world. He suffered his last loss when he faced Anthony Johnson in 2012 (=Johnson vs Branch), since then he has won eleven consecutive bouts beating Vinny Magalhaes (=Branch vs Magalhaes), Louis Taylor (=Branch vs Taylor) and Krzysztof Jotko in his last three (=Jotko vs Branch). Luke Rockhold vs David Branch is the main event of UFC Fight Night 116. Watch the video and rate this fight!