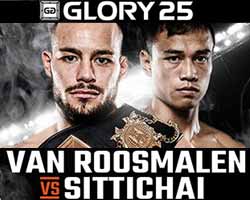 Robin van Roosmalen entered this fight with a professional kickboxing record of 46-14-3 (14 knockouts) and he is ranked as the No.1 super welterweight in the world. He suffered his last defeat in 2013 when he faced Andy Ristie (final of the Glory Lw tournament, Roosmalen vs Ristie); since then he has won four bouts winning the Glory Lw belt in 2014, against Davit Kiria (=Kiria vs Roosmalen 3), taking revenge on Ristie (=Roosmalen vs Ristie 2) and beating Steve Moxon in his last fight (=Roosmalen vs Moxon).
His opponent, the 2014 Lumpinee Ww champion Sitthichai Sitsongpeenong, has an official record of 103-28-5 and he entered as the No.2 in the same weight class. He has already fought ten times in 2015 losing to Dylan Salvador (via split decision) but then he has won the Glory lightweight contender tournament defeating Davit Kiria (=Kiria vs Sitthichai) and Josh Jauncey (=Sitthichai vs Jauncey); Sittichai has beat Jonay Risco in his last bout. Van Roosmalen vs Sitthichai, main event of Glory 25, is valid for the Glory lightweight title (Roosmalen’s second defense); they also faced each other a second time on June 25, 2016 (=Van Roosmalen vs Sitthichai II). Watch the video and rate this fight!