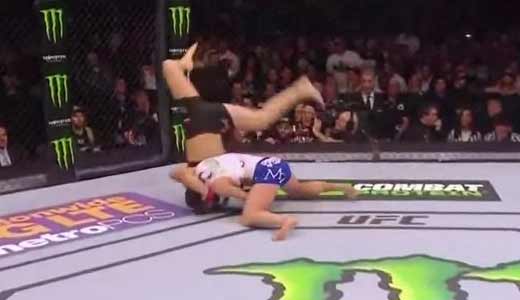 Review by AllTheBestFights.com: 2015-02-28, great start and spectacular finish: Ronda Rousey vs Cat Zingano it’s the first mma fight of the year 2015 to get four stars (UFC Performance of the Night).

Both undefeated, the black belt in judo and former Strikeforce Bw champion Ronda Rousey entered this fight with a perfect mma record of 10-0-0 (100% finishing rate) and she is ranked as the No.1 women’s bantamweight in the world while her opponent, Cat Zingano, has an official record of 9-0-0 (89% finishing rate) and she entered as the No.4 in the same weight class. Rousey fought twice in 2014 beating Sara McMann (=Rousey vs McMann) and Alexis Davis (in just 16 seconds, Rousey vs Davis) while Zingano fought just once defeating Amanda Nunes (=Zingano vs Nunes). The only common opponent faced by Ronda and Cat was Miesha Tate: ‘Rowdy’ beat her in just one round in 2012 (mma Fight of the Year candidate Rousey vs Tate I) and in three rounds in 2013, both times thanks to her signature armbar submission (=Rousey vs Tate II), while ‘Alpha’ Zingano defeated Miesha by tko in three rounds (4-stars-fight, Tate vs Zingano). Rousey vs Zingano, main event of Ufc 184, is valid for the Ufc women’s bantamweight title (held by Rousey). Watch the video and rate this fight!