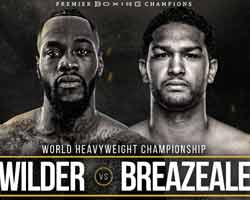 Review by AllTheBestFights.com: 2019-05-18, good finish between Deontay Wilder and Dominic Breazeale: it is close to get four stars.

The undefeated former Olympian and current Wbc Hw champion Deontay Wilder entered this fight with a pro record of 40-0-1 (39 KOs=97%) and he is ranked as the No.2 heavyweight in the world. In his last three bouts he has beat Bermane Stiverne (Deontay Wilder vs Bermane Stiverne 2) and Luis Ortiz (Deontay Wilder vs Luis Ortiz) but in his last fight he was stopped in a draw by Tyson Fury (4-stars fight, Deontay Wilder vs Tyson Fury).
His opponent, the former Olympian Dominic Breazeale, has an official boxing record of 20-1-0 (18 KOs=90%) and he entered as the No.11 in the same weight class. He suffered his only loss when he faced current #1 Hw Anthony Joshua in 2016 (Anthony Joshua vs Dominic Breazeale), after this bout he has won over Izuagbe Ugonoh (Dominic Breazeale vs Izuagbe Ugonoh), Eric Molina and Carlos Negron (Dominic Breazeale vs Carlos Negron). Wilder vs Breazeale is valid for the WBC World heavyweight title (Wilder’s eighth defense). Watch the video and rate this fight!