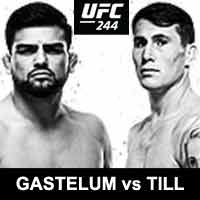 Review by AllTheBestFights.com: 2019-11-02, fight not so exciting between Kelvin Gastelum and Darren Till: it gets two stars.

The Tuf 17 winner Kelvin Gastelum entered this fight with a pro mma record of 15-4-0 (67% finishing rate) and he is ranked as the No.7 middleweight in the world but he comes off the loss against current #1 Mw Israel Adesanya (Kelvin Gastelum vs Israel Adesanya); before this bout, in 2018, he had beat Ronaldo Souza (Kelvin Gastelum vs Ronaldo Jacare Souza).
His opponent, Darren Till, has a record of 17-2-1 (71% finishing rate) and he entered as the No.14 in the same weight class but he comes off two consecutive losses, against Tyron Woodley (Tyron Woodley vs Darren Till) and Jorge Masvidal (Darren Till vs Jorge Masvidal); before these two fights he had defeated Stephen Thompson (Stephen Thompson vs Darren Till). Gastelum vs Till is on the undercard of Jorge Masvidal vs Nate Diaz – UFC 244. Watch the video and rate this fight!

Whittaker’s next fight: Robert Whittaker vs Darren Till

Gastelum vs Till Fight Video: