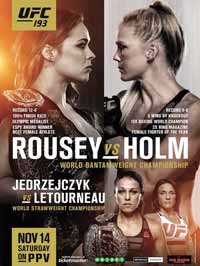 Review by AllTheBestFights.com: 2015-11-15, pretty good fight between Uriah Hall and Robert Whittaker: it gets three stars.

The black belt in karate Uriah Hall entered this fight with a pro mma record of 12-5-0 (83% finishing rate) and he is ranked as the No.7 middleweight in the world (currently the #1 in this division is Chris Weidman). He lost to Rafael Natal in May, but then he has won over Oluwale Bamgbose and Gegard Mousasi (=Mousasi vs Hall).
His opponent, the black belt in hapkido and karate and Tuf “The Smashes” Ww winner Robert Whittaker, has a record of 14-4-0 (86% finishing rate) and he entered as the No.18 in the same weight class. He suffered two consecutive defeats between 2013 and 2014, against Court McGee (=McGee vs Whittaker) and Stephen Thompson (=Whittaker vs Thompson), but then he has won three fights beating Brad Tavares in his last one (=Tavares vs Whittaker). Hall vs Whittaker is on the undercard of Ronda Rousey vs Holly Holm – UFC 193. Watch the video and rate this fight!