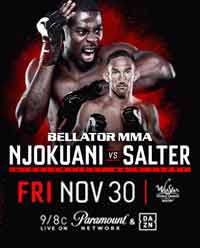 Review by AllTheBestFights.com: 2018-11-30, pretty good finish between Chidi Njokuani and John Salter but it is not enough to get three stars: it gets two.

Chidi Njokuani entered this fight with a record of 18-5-0 (61% finishing rate) and he is ranked as the No.41 middleweight in the world. He fought three times last year beating Melvin Guillard (Melvin Guillard vs Chidi Njokuani) and Hisaki Kato but between these two bouts he was defeated by Andrey Koreshkov (Andrey Koreshkov vs Chidi Njokuani).
His opponent, the black belt in Bjj John Salter, has a mma record of 15-4-0 (100% finishing rate) and he entered as the No.40 in the same weight class but he comes off the loss against Rafael Lovato Jr (Rafael Lovato Jr vs John Salter). Before this bout, in 2017, he had beat Kendall Grove in July (John Salter vs Kendall Grove) and Jason Radcliffe in November. Njokuani vs Salter is the main event of Bellator 210. Watch the video and rate this fight!