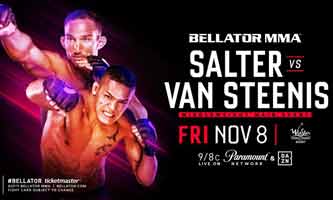 Review by AllTheBestFights.com: 2019-11-08, fight not so exciting between John Salter and Costello van Steenis: it gets two stars.

The black belt in Bjj John Salter entered this fight with a professional mma record of 16-4-0 (100% finishing rate) and he is ranked as the No.32 middleweight in the world. He fought twice last year losing to Rafael Lovato Jr (Rafael Lovato Jr vs John Salter) and beating Chidi Njokuani (Chidi Njokuani vs John Salter).
His opponent, Costello van Steenis, has an official record of 12-1-0 (75% finishing rate) and he entered as the No.47 in the same weight class. He suffered his only loss when he faced Jake Bostwick in 2015, since then he has won six consecutive fights defeating Chris Honeycutt and Mike Shipman in his last two. Salter vs van Steenis is the main event of Bellator 233. Watch the video and rate this fight!