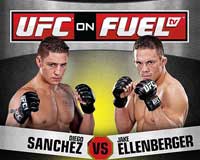 Review: 2012-02-15, good first round with some great exchanges, nice ground and pound in the second period plus an exciting ending of the fight: Jake Ellenberger vs Diego Sanchez, UFC Fight of the Night, is very close to get four stars. Diego Sanchez (23-4-0) entered as the No.10 welterweight in the world while Jake Ellenberger (26-5-0) entered as the No.3. Sanchez vs Ellenberger is the main event of “UFC on Fuel TV”. Watch the video!