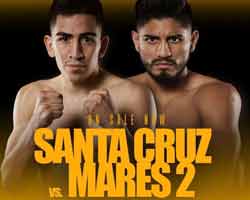 Review by AllTheBestFights.com: 2018-06-09, great performance by both boxers: Leo Santa Cruz vs Abner Mares 2 is close to get four stars!

The world champion in three different weight classes Leo Santa Cruz entered this fight with a professional boxing record of 34-1-1 (19 knockouts) and he is ranked as the No.1 featherweight in the world. ‘El Terremoto’ Santa Cruz suffered his only loss when he faced Carl Frampton in 2016 (Santa Cruz vs Frampton I) but then he took revenge on him in 2017 (Frampton vs Santa Cruz II) and beat also Chris Avalos (Leo Santa Cruz vs Chris Avalos).
His opponent, the former Olympian and world champion in three different weight classes Abner Mares, has an official record of 31-2-1 (15 knockouts) and he entered as the No.4 in the same weight class. He lost to Leo Santa Cruz in 2015 (Santa Cruz vs Mares) but then he defeated Jesus Andres Cuellar in 2016 (Cuellar vs Mares) and Andres Gutierrez in 2017 (Abner Mares vs Andres Gutierrez). Santa Cruz vs Mares 2 is valid for the WBA Super World featherweight title. Watch the video and rate this fight!