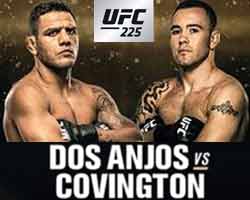 The black belt in Brazilian jiu-jitsu and former Ufc Lw champion Rafael dos Anjos entered this fight with a pro mma record of 28-9-0 (50% finishing rate) and he is ranked as the No.2 welterweight in the world (currently the #1 in this division is Tyron Woodley). ‘RDA’ lost two consecutive fights in 2016, against Eddie Alvarez (dos Anjos vs Alvarez) and Tony Ferguson (dos Anjos vs Ferguson), but then he has won three bouts beating Robbie Lawler in his last one (Robbie Lawler vs Rafael dos Anjos).
His opponent, the 2013 FILA 77 kg No-Gi grappling world champion Colby Covington, has a record of 13-1-0 (54% finishing rate) and he entered as the No.5 in the same weight class. He suffered his only loss when he faced Warlley Alves in 2015, since then he has won five bouts defeating Bryan Barberena, Dong Hyun Kim (Kim vs Covington) and Demian Maia in his last three (Demian Maia vs Colby Covington). Dos Anjos vs Covington is valid for the interim Ufc welterweight title; undercard of Robert Whittaker vs Yoel Romero 2 – UFC 225. Watch the video and rate this fight!

(Free embeddable video hosted on Youtube and not uploaded by AllTheBestFights)
https://www.youtube.com/watch?v=9QZo1XwWdU4