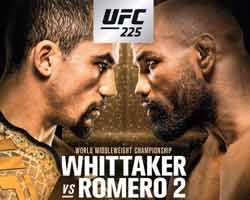 Review by AllTheBestFights.com: 2018-06-09, great performance with some tough exchanges: Robert Whittaker vs Yoel Romero 2 is close to get four stars (UFC Fight of the Night).

The black belt in hapkido, karate, Tuf Ww tournament winner and current Ufc Mw champion Robert Whittaker entered this fight with a professional mma record of 19-4-0 (74% finishing rate) and he is ranked as the No.2 middleweight in the world (currently the #1 in this division is Georges St Pierre). He suffered two consecutive losses between 2013 and 2014, against Court McGee (McGee vs Whittaker) and Stephen Thompson (Whittaker vs Thompson), but then he has won eight bouts defeating Ronaldo ‘Jacare’ Souza (Jacare vs Whittaker) and Yoel Romero in 2017 (Yoel Romero vs Robert Whittaker I).
His opponent, the former Olympian wrestler Yoel Romero Palacio, has an official record of 13-2-0 (85% ko/tko victory rate – he has never won via submission) and he entered as the No.3 in the same weight class. Before losing to Robert Whittaker last year he had beat Chris Weidman in 2016 (Weidman vs Romero) and he has defeated also Luke Rockhold in 2018 (Yoel Romero vs Luke Rockhold). Whittaker vs Romero 2, main event of Ufc 225, is valid for the Ufc middleweight title (non-title bout for Romero since he missed weight for 0.2 lbs). Watch the video and rate this fight!