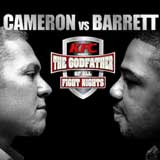 Review: 2012-07-05, the fight between Monte Barrett and Shane Cameron is very close to get four stars thanks to the impressive Ko in the fourth round. Monte Barrett (35-9-2) entered as the No.25 heavyweight in the world while Shane Cameron (28-2-0) entered as the No.13. Barrett vs Cameron is valid for the WBO Asia Pacific and WBO Oriental heavyweight titles. Watch the video!