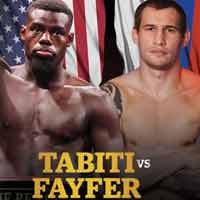 Review by AllTheBestFights.com: 2018-10-13, disappointing fight between Andrew Tabiti and Ruslan Fayfer: it gets two stars.

Both undefeated, the former USBA and NABF Cw champion Andrew Tabiti entered this fight with a perfect boxing record of 16-0-0 (13 KOs=81%) and he is ranked as the No.8 cruiserweight in the world (currently the #1 in this division is Oleksandr Usyk) while his opponent, Ruslan Fayfer, has a record of 23-0-0 (16 knockouts) and he entered as the No.27 in the same weight class. In their last three bouts Tabiti has won over Quantis Graves, Steve Cunningham (Steve Cunningham vs Andrew Tabiti) and Lateef Kayode (Andrew Tabiti vs Lateef Kayode) while Fayfer has defeated Junior Anthony Wright, Isaac Paa Kwesi Ankrah and Emmanuel Danso. Tabiti vs Fayfer is the quarter-final of the World Boxing Super Series cruiserweight tournament (WBSS – Muhammad Ali Trophy); undercard of Zolani Tete vs Mikhail Aloyan. Watch the video and rate this fight!